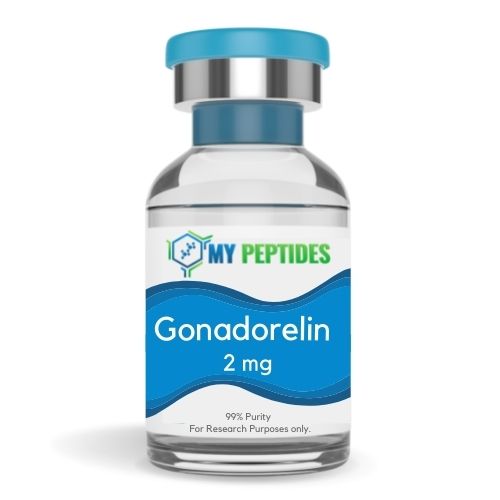 Gonadotropin-releasing hormone (GnRH) is another name for gonadorelin. Gonadotropin is a synthetic decapeptide, LH (luteinizing hormone) and FSH (follicle-stimulating hormone) are released when this hormone is present.

Current medical uses for Gonadorelin include treating infertility, hypogonadism, and irregularities in the menstrual cycle. Gonadorelin peptide may also be used to treat breast and prostate cancer as well as Alzheimer’s disease, according to new research.

What Exactly is Gonadorelin:

Gonadotropin-releasing hormone (GnRH) is another name for gonadorelin. Gonadotropin is a synthetic decapeptide, LH (luteinizing hormone) and FSH (follicle-stimulating hormone) are released when this hormone is present.

Current medical uses for Gonadorelin include treating infertility, hypogonadism, and irregularities in the menstrual cycle. This peptide may also be used to treat breast and prostate cancer as well as Alzheimer’s disease, according to new research.

What is Gonadorelin Known For?

Infertility
Females’ ovaries mature and ovulate eggs due to Gonadorelin signalling the pituitary gland to release FSH and LH. Also, males’ testes produce sperm as a result of FSH and LH signalling. Additionally, oestrogen and progesterone stimulate the production of their hormones in the testes and ovaries, such as oestrogen and progesterone in female organs and testosterone in male organs.

Pulses of Gonadorelin peptide are emitted from the brain’s nerve cells. Men’s pulses are regular, whereas women’s pulses change with the menstrual cycle. This peptide, for example, is more common just before ovulation. Research has shown women who cannot ovulate may be treated with this peptide, which, when used for 2-3 weeks, can help stimulate ovulation.

Women’s health issues
In light of recent research indicating that oestrogen may be a factor in the growth of some breast cancer cells, researchers are examining whether blocking oestrogen receptors might be an effective treatment and prevention strategy. Gonadorelin has been shown in studies to reduce the risk of breast cancer by suppressing the ovarian production of oestrogen.

This peptide’s effects extend beyond breast cancer prevention to other oestrogen-related diseases like hyperandrogenism. It lowers oestrogen levels in the body and helps restore the balance of hormones to a healthy level with long-term GnRH treatment.

Alzheimer’s
Sex hormones, such as testosterone, may help maintain cognitive function and ward off diseases like Alzheimer’s. For example, researchers believe that gonadorelin, a substance that stimulates the production of testosterone, has the potential to be an effective treatment for dementia and a preventative measure against Alzheimer’s disease.

In new research, Gonadorelin and its analogues are being studied to see how they affect MS4A6A and APOE expression. So far, genetic loci linked to late-onset Alzheimer’s disease have been identified by researchers, but multiple loci must work together to cause significant problems. This tandem interaction process is influenced by gonadorelin in some way, but the reason for this is unclear at this time.

As of now, scientists are focusing their efforts on understanding how to treat and prevent Alzheimer’s disease (AD) by altering the way genes communicate. Gonadorelin appears to be an effective treatment and is currently being studied.

Men’s Health Issues
Cancer of the prostate is the most sensitive to hormones, so it’s treatable if caught early enough. In addition, prostate cancer can be slowed or even eradicated by reducing the amount of testosterone in the body.

This can be accomplished by cutting off the body’s hormone supply completely. As a result, patients with aggressive cancer may need to have their testes surgically removed. In its place, gonadorelin administration is a safer, more effective, and reversible treatment option.

Prostate cancer patients have been treated with Gonadorelin since 1979, thanks to this hormone. However, according to research at the time, some androgens were made locally in the prostate, indicating that this peptide was only effective against prostate cancer. This peptide has the potential to treat and prevent the spread of prostate cancer when used in conjunction with early detection.

This peptide has no known adverse side effects. Scientists say it’s a healthy protein that won’t harm you. If any side effects do occur, they are scarce and include the following:

Be the first to review “Gonadorelin” Cancel reply