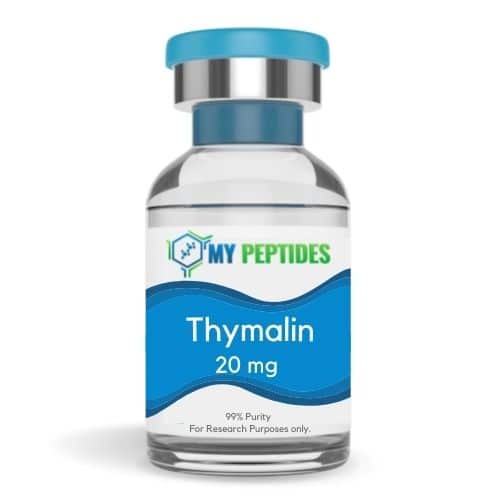 Studies show that the anti-inflammatory and pain-relieving properties of Thymalin peptide can be used to improve the heart’s function and the immune system’s.

What Exactly is Thymalin:

Studies show that the anti-inflammatory and pain-relieving properties of Thymalin peptide can be used to improve the heart’s function and the immune system’s.

Another study shows that taking Thymalin reduces mortality over eight years by about two per cent.

Thymalin, is a peptide that regulates the quantity and ratio of T- and B-lymphocytes, enhances blood restoration, and improves cellular metabolism, restoring weakened immune systems.

Despite its illegality for human consumption, Thymalin is widely used in bodybuilding. As a result of its well-known muscle-enhancing properties, Thymalin supplementation is popular among bodybuilders.

According to research, cancer, MS, asthma, and immune system depression can all be treated with Thymalin.

What is Thymalin Known For?

Extended life expectancy:
Thymalin has been found to have a normalizing effect on a variety of physiologic functions in elderly adults, according to Russian research. A Thymalin human study found that immune, cardiovascular, and nervous system function improved in older adults. Significant declines were also seen in the incidence of acute respiratory disease and cardiovascular disease, as well as osteoporosis. In addition, after a certain period, patients who received Thymalin therapy had a significantly lower mortality rate than those who did not.

Thymalin’ s health benefits are multiplied by two when taken with epithalmin. The thymus and pineal glands are linked to the ageing process. The pineal gland safeguards the thymus from ageing when it is functioning correctly.

Strengthened immune system:
Many studies have focused on the immune system effects of Thymalin. Results from studies show that exposure to the thyroid-stimulating hormone (Thymalin) changes lymphocyte subpopulation levels and the activity of natural killer cells.

Since a proportion of chronic medical conditions cause an imbalance in cellular immunity, this is a critical step in preventing patients from becoming infected or developing cancer, depending on their specific case.

Patients with diabetic retinopathy, for example, respond well to Thymalin treatment. This is because it aids in immune correction and T-lymphocyte proliferation, both reducing inflammation and speeding up disease progression.

Scientists are also studying Thymalin for its potential as an HIV vaccine. Thymalin has been shown in studies to increase T-cell response to vaccines and improve HIV protection. New rat research confirms this hypothesis.

Thymalin administration has been shown to reverse the effects of reduced cell proliferation in rats after thyroid gland removal in studies. It’s interesting to note that it has the ability to stop them entirely. As a result, the immune system is strengthened, infections are prevented, and improved overall health.

Heart:
Heart disease can be prevented rather than treated. It’s true that once heart disease has set in, the only way to reverse it is by going on a strict diet. Even so, the procedure is lengthy, and nothing may come of it.

Thymalin has been shown to both protect and counteract heart disease in rabbits, according to research. This is accomplished by lowering lipid levels in the body, which affects lymphocytes, which are responsible for clearing out clogged arteries of plaque.

Besides that, Thymalin normalizes T-cell suppressor activity concerning the underlying causes of cardiovascular disease. Moreover, a higher Thymalin dosage, according to new research, may be able to reverse the immune dysfunction that leads to the build-up of plaque.

Overall, Thymalin can improve the immune system’s ability to fight heart disease by reducing the dysfunction that causes it. Hence, it can both prevent and treat heart disease once it has already manifested.

Kidney:
Thymalin peptide treatment may be beneficial for patients with inflammatory kidney disease, according to new research.

A clinical trial found that administering Thymalin to patients reduced their ability to improve their kidney function. Immunological factors in the disease, which can damage the kidneys, improved as well.

Doctors commonly use neodymium lasers to treat malignant and premalignant skin lesions, and the success rate is high. In addition, metastasis can be thwarted with this laser treatment.

However, Thymalin alone can suppress or cure cancer, and laser therapy isn’t required. According to the latest findings, over half of the experimental animals had their tumours regress after receiving high doses of Thymalin.

Psoriasis:
Using Thymalin and traditional psoriasis treatments has been shown in recent clinical studies to have positive effects on the condition’s symptoms. Psoriasis is a chronic inflammatory skin and joint disease that affects about one in ten people.

Thymalin usage, according to research, may be helpful as a supplemental treatment for the disease because it reduces symptoms. This means that psoriasis patients will soon be able to purchase it over-the-counter as a treatment option.

More work needs to be done to provide relief for these symptoms. However, the research available thus far is encouraging.

Side effects of Thymalin, like those of other medications, can include headaches and nausea as well as feelings of exhaustion or dizziness. Peptide safety is generally considered to be high with this particular compound. Particularly interesting are the applications of Thymalin in terms of what it can treat and what it cannot.

Be the first to review “Thymalin” Cancel reply