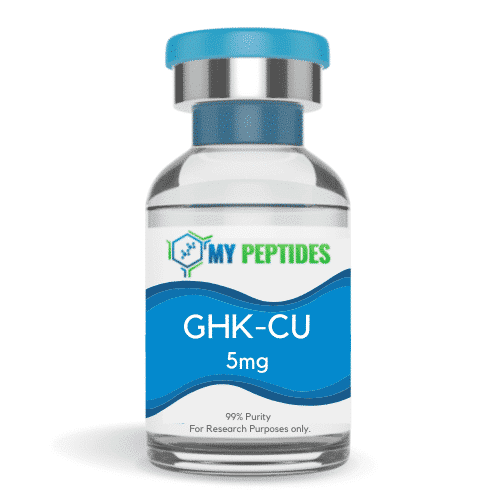 What Exactly is GHK-CU (Copper peptide)

A peptide-copper complex known as GHK-Cu was first discovered in human plasma, then in human urine, and finally in human saliva. Wound healing, anti-inflammatory results, attracting immune cells, and encouraging collagen synthesis are just some of the roles GHK plays in the human body. This naturally occurring protein fragment, known as the copper peptide, is essential for healthy body function.

As we grow older, the naturally occurring GHK peptide concentration decreases, causing inflammation, tissue destruction, and malignant activity to rise. It also has the effect of hastening the ageing process, both internally and externally. As an illustration, the GHK-CU level at the age of 20 is approximately 200 ng/ml. We’ll be at 80 ml when we’ve reached the age of 60. It’s clear then that raising copper content in the body helps ward off illness and worsens existing conditions.

GHK-Cu is a naturally occurring peptide in human plasma, urine, and saliva linked to various health benefits. It has been discovered through animal studies that GHK-Cu stimulates collagen, and fibroblasts and promotes blood vessel growth to improve the healing process, immune function, and healthy skin. In addition, there’s evidence to suggest it’s a feedback signal generated after tissue damage, according to the research. As an added benefit, it reduces free-radical damage, making it an effective anti-ageing treatment.

The peptide GHK-CU is a protein molecule. The tripeptide GHK and copper ions spontaneously form a complex. It’s a part of the body’s metabolic process and is found naturally. The created serum was named blue copper peptide, tripeptide-1 copper.

Copper ions play a critical role in cell communication as important message-transmitting substances. GHK can transmit and transfer copper ions with particular receptors on the cell membrane to help its entry cell because of its modest ability to bind copper ions (log stability constant = 16.4). In addition, GHK-Cu contains copper ions, which may help with repair and minimize light-induced damage. GHK tripeptide, a signal peptide, has been shown to encourage the synthesis of the skin matrix.

What is GHK-CU (Copper peptide) Known For?

GHK Copper is an anti-inflammatory and antioxidant that promotes collagen production for healthier, younger-looking skin. It also helps the skin appear firmer and more youthful-looking.

Other studies have found numerous advantages to copper in the hair, such as stimulating hair growth and thickness.

Effects of GHK Cu on Hair:

Most people will experience hair loss at some point in their lives, especially as they get older. Pattern hair loss affects half of all men and a quarter of all women. Cu-GHK has been found to regenerate hair growth with similar effects to minoxidil treatment for alopecia, suggesting it may be a remedy for hair loss in both men and women.

DHT is the primary culprit in both sexes when it comes to hair loss. Ingesting more copper may help with hair growth and baldness by promoting hair regrowth.

The copper peptide has been shown in studies to help stop hair loss by increasing the size of hair follicles, and GHK-CU has the potential to be a long-term natural treatment for hair loss.

The effects of GHK-CU on the skin:

In many skincare products, copper peptide-GHK (also known as GHK-cu) is an ingredient. Copper tripeptide-1, as it’s commonly known, has been shown in studies to improve skin elasticity while firming and plumping. In addition, more than a dozen well-conducted clinical studies indicate that GHK[i] can reduce sun damage, smooth out wrinkles, and reduce hyperpigmentation all at the same time. This is due to its ability to regulate collagen synthesis, a process that lessens the appearance of scars, repairs older skin, and smooths rough skin.

Another reason for its anti-ageing effects is that it raises amounts of transforming growth factor-B. Scientists believe that GHK-Cu works in a variety of biochemical pathways that influence gene transcription.

Regarding GHK-cu peptide, there is a lot of research to be done. Although the results are promising, more research is needed before the FDA approves the peptide. GHK’s anti-ageing properties are demonstrated in this case study.

A copper peptide study on 20 women with photoaged skin showed how effective it is. Using a GHK-CU facial cream for 12 weeks resulted in patients having higher collagen levels and enhanced skin laxity, fewer fine lines, and greater skin density. Scientists are adamant that it outperformed vitamin C and retinoic acid in clinical trials.

The participants also used GHK-CU eye cream for the same amount of time, which was more effective than vitamin K cream.

In another study, A cream-based GHK-Cu copper-peptide was applied morning and evening, which enhanced aged skin, and lessened the appearance of wrinkles and increased thickness. The same investigation found that GHK-CU was safe to use and didn’t cause any side effects.

GHK-Cu appears to speed up the healing process after skin burns in mice by up to 30%. In addition, GHK-Cu increases the growth of blood vessels while also attracting immune cells of injury. Because burned skin takes a long time to regrow blood vessels, this research suggests that GHK-Cu treatment could open up new possibilities for wound healing.

Alzheimer’s and other neurodegenerative diseases have a largely unanswered question mark surrounding them. Research into treatments for these ailments is ongoing, but it is a challenging task.

According to the results of GHK-Cu clinical studies[iii], this peptide can slow down the ageing process by improving neuron function and stimulating angiogenesis in the nervous system. Recently, GHK-Cu has increased nerve growth, reset pathological expression of genes, and decreased nervous system inflammation.

GHK-Cu has been found in large quantities in the brain, according to research. That declines as people get older. Genetic dysregulation, for example, has been linked to neurodegenerative diseases such as Alzheimer’s and Parkinson’s. Rather than new disease processes, scientists now believe that ageing-related decline in GHK Cu is the root cause of neurodegeneration.

Researchers should look into this because it could lead to a treatment for various age-related illnesses and diseases in the future.

GHK-CU peptides versus Retinol:
Due to its numerous advantages, copper is becoming a popular ingredient in skincare products. Copper peptide, which is high in antioxidants, has long been an effective ingredient in skincare products for restoring smoothness, and firmness and minimizing the appearance of fine lines and wrinkles. As an illustration of how prevalent these peptides are becoming, the term “copper peptide serums” was searched over 1000 times on Google in a single month. The public is captivated!

Retinol or peptides: which is better? The retinol-versus-peptides debate has people interested, but the answer is contingent on each individual’s needs and wants. Peptides are a great alternative to retinol for people with sensitive skin because they are less invasive. GHK-CU copper peptide is a less harsh method of allowing the skin to produce collagen than is retinol for smoothing wrinkles.

Retinol and copper peptides both work well, but copper is a little more restrained. As a result, retinoids tend to aggravate and cause redness in people with sensitive skin.

GHK-Cu serves a variety of purposes in the body, from skincare to pain relief.

GHK-Cu administration had significant impacts on pain-induced behaviour in rat studies. These analgesic effects are based on research that shows that this peptide stimulates the release of the natural pain reliever L-lysine. Additionally, GHKCU has been shown to boost levels of the analgesic amino acid L-arginine.

As a result, researchers are eager to learn further about GHK-Cu peptide, as their findings thus far suggest that it may offer an alternative to addictive opiate medications to treat pain and other symptoms.

Fortunately, studies on mice have shown that GHK-Cu sublingual or intravenous has minimal side effects.

A study on mice found that consuming GHK-Cu helped prevent fibrosis, a byproduct of the cancer drug bleomycin. This indicates that GHK-Cu could be used as chemotherapy add-on therapy to increase the dose of cancer medications without increasing the risk of harmful side effects.

According to the findings, TNF-alpha and IL-6 are inflammatory molecules that act on smooth lung muscle because of peptide regulation of their levels. Therefore, to prevent fibrotic remodelling and improve collagen deposition, the administration of GHK-Cu reduces inflammatory lung disease.

Here are some of the health benefits you can expect from consuming GHK-CU peptide:

Beauty and medicine are just beginning to make use of GHK-Cu, which is a relatively new compound. As a result, little is known about the side effects that could result. Following are a few adverse effects that have been linked:

However, this peptide’s best feature is that it’s produced naturally in the body, which means your system will be ready to accept and use GHK when it arrives. Therefore, making sure you’re using the correct dosage is critical for minimizing any potential side effects.