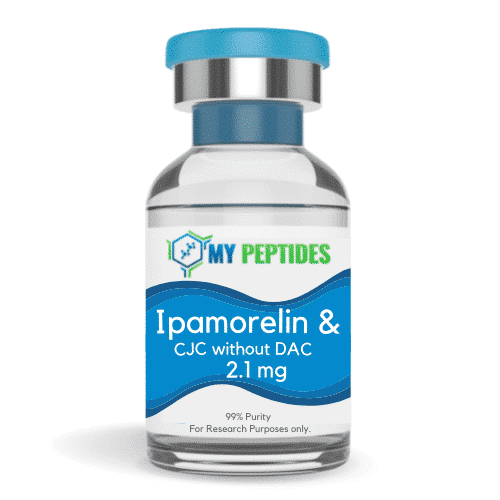 Ipamorelin is a hormone that is only produced by specific cells in the body. Research into its properties has been extensive. This substance’s properties include the ability to work as a muscle relaxant and builder, as well as a powerful bone-building supplement. In addition, Ipamorelin has been shown in studies to stimulate insulin levels from the pancreas and improve bowel mobility and gastric system function.

Growth hormones are more effective when CJC-1295 no DAC is administered because it stimulates the hormone-releasing receptor. It is also highly selective and has positively impacted bone health, body weight, glucose intolerance, and muscle development and growth.

Due to its dual mechanism of stimulating growth hormones’ axis, this peptide formula may boost the overall impacts of growth hormones. In addition, studies on animals have shown that combining both peptides into a single solution increases the benefits while decreasing the risks.

The formula’s most noticeable effect is an increase in growth hormone production. As a result, you’ll likely gain more lean muscle mass and develop it more quickly. This double peptide method can improve metabolic function when all of its components are considered together.

Bone Density: As we age, our bones become more brittle, which is why we are more prone to injuries.

An increase in strength and size

Fat-burning capacity: It is possible to burn more calories throughout the day by gaining muscle mass, which increases the body’s resting metabolic rate.

Improved sex drive: you’ll have more energy for it. Being unable to perform sexually can have a significant impact on your mental health.

Improved Injury Recover and Repair: Following a proper bioidentical hormone replacement therapy regimen improves overall well-being. This is based on the length of recovery time (acute musculoskeletal pain) and the severity of the injury.

The immune system is boosted by this supplement: The ability to achieve optimal health is greatly aided by having a robust immune system.

The benefits of this supplement include improved cognition and memory, increased focus, and a general sense of mental clarity and sharpness.

CJC-1295’s low incidence of side effects is one of the primary reasons for its popularity among anti-ageing patients. CJC-1295 is well tolerated by the majority of patients, with few to no side effects. Injection site reaction was the most common side effect, with most people reporting skin complaints or mild pain where the injection was made.

The most common side effects are injection site sensitivity, soreness, or pain, a virus that causes influenza-like symptoms, flushing, hives, or other skin irritation, headache, dizziness, nausea, or drowsiness, hyperactivity, swallowing problems.